“My primary concern was making sure that we did whatever we could to make sure she could still live a long and happy life,” explained Casey Stiteler, Jordan’s husband. Expecting to learn about her ancestry, Jordan joined the Healthy Nevada Project. Instead, she received an unexpected call, which she says saved her life.

I’m healthy, young, and I’m fine, then I got these results – Jordan Stiteler

The Stiteler family was stunned to learn that young mom Jordan carried the marker for Familial Hypercholesterolemia (FH), which is a type of high cholesterol. FH can only be treated through a combination of lifestyle choices and medication. Jordan’s father died young from a stroke, and others in her family also suffered heart attacks and strokes at an early age. She never connected her high cholesterol with these premature deaths until she joined the Healthy Nevada Project. 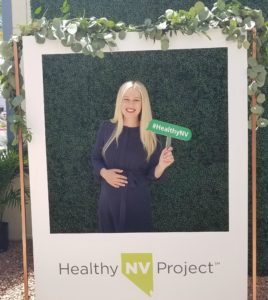 After her initial call from the Healthy Nevada Project team, Jordan received guidance, support and the power of knowledge to help her make impactful health decisions. “Because of the study, I finally established a relationship with a General Practitioner, did blood work, and was referred to specialists. We created short term and long-term plans”. Switching to a nutrient-rich heart-healthy plant-based diet and exercising regularly, Jordan feels she has a second chance at life that she didn’t know she needed. Since FH is a genetic disease, several family members immediately joined the study to learn about their genetic risk. The family has learned that this condition appears to have been passed down from Jordan’s grandmother to possibly her father, herself, her brother, her aunt and potentially cousins. Casey explained: “I was so relieved that we found out about Jordan’s diagnosis early enough to treat it and early enough to make sure that our son has all of the tools and information he needs to live a long and healthy life, despite having FH.” 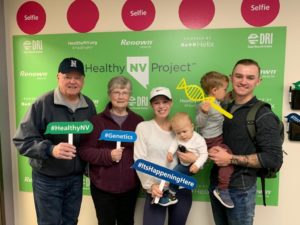 Jordan missed joining the Healthy Nevada Project study during Phase One. However, she was excited when she learned Phase Two offered new appointments to Nevadans. Phase Two was essential to Jordan since this Phase specifically screens for genetic risks linked to heart disease and other conditions. Note: all Phase One participants are welcome to join Phase Two to learn about their hereditary genetic risks to conditions in which early detection can help make a positive impact.

Everyone should go do the testing. It’s free, painless, and quick. It could change your life – Jordan Stitler

Casey shared his wish for fellow Nevadans: “I think we owe it to our loved ones to get this type of information and use it to make sure we live long and healthy lives, together.” Now pregnant with her second child, the Stiteler family is ready for the future.